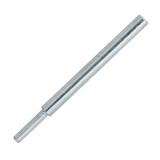 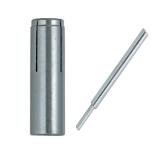 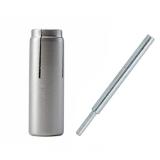 
A two-piece, internally threaded expansion anchor with four equally-spaced longitudinal slots extending from the bottom end of the outer shield, inside of which sits a pre-assembled dilating plug. The bottom lip of the anchor is tapered. It is permissible for a section of the shield to be knurled, to increase the gripping action of the anchor.

Intended for flush mounted, medium to heavy-duty applications in solid materials such as stone and concrete. It can be used in, but are not limited to, overhead assemblies such as duct work and pipe hangers because the internal plug holds its position. Can also be used to anchor handrails and floor-mounted door stops.